I generally discuss the charts of impressive companies. But today I am going to describe the chart of the most influential person of decades. I want to see if we can explain his life from his birtth chart.

Elon Musk was born on 6/28/1971 in Pretoria, South Africa. He is an innovator and business magnate and can realize the unthinkable. His achievements are extraordinary, the best being the use of electricity for automobiles. Can we see such a person in his birth chart? Let us see.

Here is his birth chart. 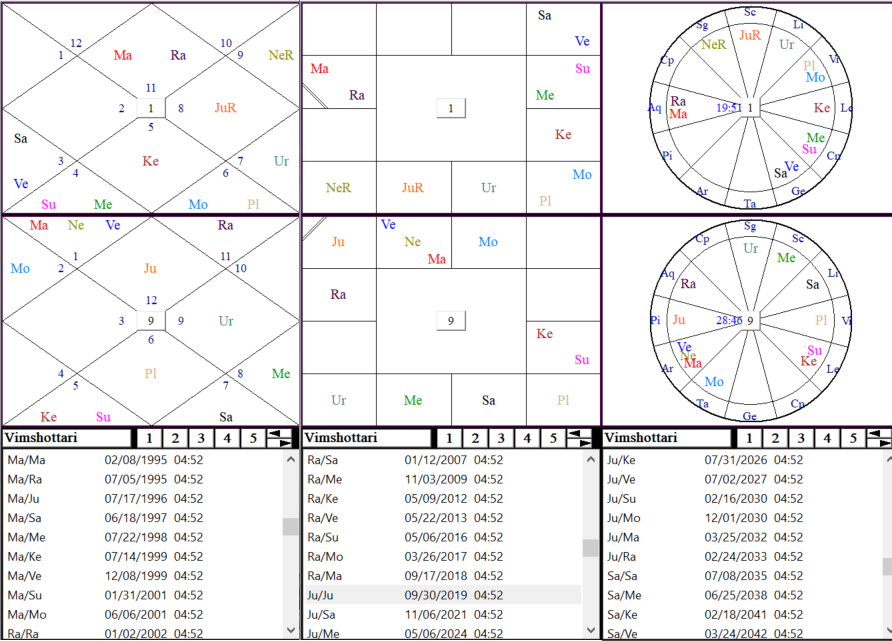 Mars, the planet of energy, makes a grand trine with the love planet, Venus, in Gemini and the science planet, Uranus, in Libra. Both Gemini and Libra are the signs of innovation. Most of the planets are in the air signs. Putting all the things together easily explains the innovative and scientific level of Elon Musk.

The wealth planet Jupiter rules the two houses of money, the second and eleventh. It occupies the most prominent house of the chart, tenth. Retrogradation makes it even more beneficial. He started the major period of Jupiter in 2019. He was already highly wealthy before this period started.

Now, let us look at the Navamsha, which shows the real strength of the chart. Mars and Sun occupy their Moola-Trikona signs, Jupiter its own sign, and Saturn and Moon their signs of exaltation. Rahu and Ketu in Vargattama. I have studied thousands of charts, but I have never seen such a powerful Navmsha chart. No wonder he is a man of his own caliber, unparalleled in the present day and age.

My view about the month December 18 – January 16 was that it would be a down month for S&P 500. But it ended flat. Although the indexes were flat, a lot of leading stocks fell hard. The list included NFLX, SHOP, TSLA, AAPL, and ADBE. Next month (January 17 – February 14) was difficult. I believe I was only one month earlier to predict the coming correction in the stocks. Anyway, more stocks fell during this month. This time it was the turn of FB, PYPL, UBER, etc.

Now the question is will these stocks recover? If yes, when will these stocks recover? I generally use the transit of Jupiter over the natal chart to see the price movement. Based on that, I believe the period of May to October when Jupiter comes into Aries will be good for TSLA and FB. TSLA can even try to target new highs, whereas FB will also try but not succeed. Other stocks may have to wait longer.

Please note these are my views based on astrology. I had been wrong earlier many times and maybe wrong this time also.

Here is a relevant question from a Viewer that other viewers might have too. I thought others may like to know answer too.

Could you explain something to me (and perhaps to all your subscribers?) something vexing…

Should I expect the S&P 500 to pull back during the second of half of September while bitcoin continues to rally?

Here is my answer:

The basis of the monthly solar return chart is the NYSE chart, and for bitcoin is the bitcoin-genesis chart.

Using those charts I expect the month Sept 19 – Oct 18 could be bad, whereas the month of Sept 5-Oct 4 (using exact dates now instead of rounding up as September) could be good. It does not mean every day within these dates would be good or bad. So the answer to your question cannot be “yes”, but only “I don’t know”. However, it could be “yes” also if the money moves out of stocks into cryptos.

The astrological point of view on the stocks which are in the news currently performing are discussed here.

People are very concerned about this stock, as it has moved strongly higher in 2020, and now correcting in 2021. It is highly overpriced, and some people think it can crash. I am going to write my long term astrological viewpoint about this stock today. Investors should use their own diligence to invest in this stock.

The stock gave a stellar profermance last year because the period of a strong Jupiter in Aries had just started. This was combined with the transit of strong Mars in Aries, which lasted for 7 months due to retrograde motion. Such coincidences are rare. It started corrected as soon as Mars moved to Taurus. Since the stock is still under the major-period of Jupiter, one cannot say that the stock will crash or go significantly down over the remaining period of Jupiter. Jupiter period started on 2/28/2020 and would last until 2/27/2030. Good sub-periods would last until 2/27/2028. But for sure the kind of move it has seen in 2020 is not going to happen again, although it will still be a good stock to own.

The action of transits is significant when strong planets conjunct the Maha-dasha and Antar-dasha planet. So whenever Mars and Sun comes back to Aries, the upside moves may be seen. Note that Sun comes to Aries on March 21 and leaves on April 21, every year. The stock may therefore recover now during this period in 2021. It may also do better during this month every year. The months of Mars coming to Aries are June-July 2022, May-June 2024, April-May 2026, and March-April 2028. One can expect good performance during these months.

Combining the effect of dashas and transits, I think the stock will do good for years to come, but one cannot expect it to double every year now. Using astrology I can only see the direction, or good or bad period. I cannot put numbers, i.e. I cannot say how far the stock prices can go up.

Disclaimer: These are my conclusions based on my knowledge of astrology. I do not guarantee that it will happen like that. I may be entirely wrong also. Please keep that in your mind, and make your own decision on investing in TSLA stock.

After my last upate on Tesla, the stock has been going up, up and up. I had warned about shorting this stock, because I was seeing good planetary configurations only. I have decided to give my astrological views again on this stock. I think, TSLA price may go slighly higher or remain flat in February, flat in March, and lower in April 2021. Let us see how this monthly study works out. I will then update it again in April.

The stock of Tesla has been performing as if there is no upside limit. It was $330 on March 18. Today, August 21, it is about $2100. That is more than 6x in five months. I therefore decided to look at it closely and share with you as to ‘how can this happen’ and see if it is a time to short this stock. Well, my findings may surprise you. The configuration of planet is still favorable for this stock until next year. I cannot say how far this can go, but if somebody wants to short it, he should be extra, extra careful.

An update about Mallinckrodt (MNK):

This company has filed bankruptcy last week. I have mentioed earlier also – in comments section – that this stock is a total gamble now. It can go to ZERO in a few months. And there is a high probability of that. It may also go to $5 or $10 or even $20 in about 5-10 years. But there is only a small probability of that. If you are invested in it, leave it there if you are completely OK with losing your money. Otherwise sell to recover at least $1.50.

Other companies of 10 for 2020 like, AMZN, FB, WIX, ENPH and BIIB etc are doing good. This episode only shows the importance of diversification.

The US stock market may go slightly down during the next month (January 17 to February 15). The critical planet, Mars is direct now in the sign Gemini and occupies the second house. This is bad. The month lord is Sun and it occupies the ninth house in Capricorn. This is good. The planet Jupiter occupies the 12th house. It aspects Moon which is about to change its sign from Scorpio to Sagittarius. This configuration is favorable. I, therefore, expect this period to be somewhat challenging month for the U.S. stock market.